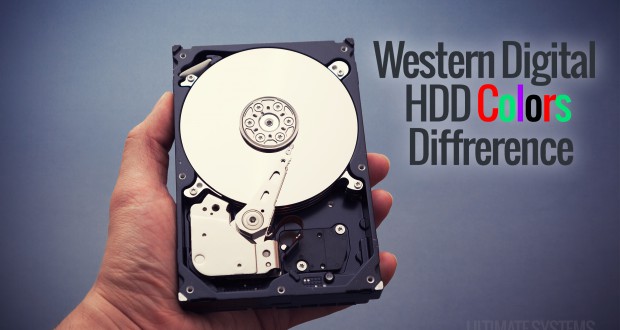 What is the difference between WD Hard Drive colors?

In this article we will compare and show you the main differences between Western Digital’s internal desktop hard-drives, their up’s and down’s, where and how to use them.

Since the beginning of October 2015, Western Digital has merged the WD Green hard drive line-up into WD Blue.

Cool, quiet operation with lower power consumption. (desktop)
WD Green is the low-end branch of WD that offered a lower power consumption, a higher storage capacity at a affordable price with variable RPM‘s ( Rotation Per Minute) ranging between 5400-5900/s that caused the Green one’s to crash when used on a daily base. Now Western Digital decided to stir the Green branch into the Blue sector, expanding their line of offer with new models and solutions.Moving forward to the “Green-Blue” WD’s we will stop and look at the “mainstream” branch of WD hard drives. (WD Green is now WD Blue).

WD Green is no longer in production ! Solid performance and reliability for everyday computing. (desktop)
The WD Blue hard-drives offers a range of disk space from 250 GB to 6TB, RPM’s ranging from 5400 to 7200 and a cache space of 16mb, a single one with 32mb and 64mb.The newest and most appreciated move is the use of a 1TB single platter that allows higher speed’s due to the higher density, the shortage of movement on the disk that leads to a small seek time of data and a higher processing rate.In the blue sector of WD we will find the Blue SSHD (Solid State Hybrid Drive) that combines the massive storage capacity of WD drives with the NAND flash SSD technology uniting capacity with speed. The Blue SSHD comes in two forms, the 2,5″ for notebooks and the 3,5″ for desktop PC, the first having the storage capacity of 1TB and the second 4TB. The 8GB NAND Flash storage offers higher speed, having a self-learning system that prioritize the most used data for faster access in the solid state portion of the device.The SATA storage for both Blue HDD and SSHD is standard 6GB/s. Maximum performance for power computing. (desktop)
Moving forward to the Black branch of WD we stumble opon the high-end section of Western Digital hard drives. With storage capacities ranging from 1TB to 6TB, the black series are well and wide known as reliable, long-term alternative for any sector of users, from desktop users, to gamers and professional power-users.

In their latest release, the WD Black 6TB offers a 128mb cache, which is double the ammont of his predecessor, the 4TB Black. This increases the overall performance of the drive and reduces the time of reading and writing process.

The standard RPM for the WD Black’s is 7200rpm.

The 5 year warranty back’s up the specification and performance review, making Western Digital Black series one of the most trustful storage option in the desktop line-up.

With the WD Black in our tests we got a maximum of 160MB/sec transfer rate and 8.5ms access time. Increased workloads and reliability. (NASware storage or desktop)
WD Red is designed for NAS (network attached storage) which is engineered to handle the increased workloads from your business. It comes with a 5-year limited warranty. You can also use this hard drive in your desktop PC. Performance and increased reliability. (NASware storage or desktop)
WD Red Pro is designed for NAS (Network Attached Storage), but it is also a very good hard drive for your desktop PC, it is as fast as the WD black, more quiet and probably more reliable, but more expensive.

With the WD Red Pro in our tests we got a maximum of 160MB/sec transfer rate and 8.5ms access time just like the WD Black, but the Red Pro is much more quiet because of the vibration reduction system. Designed for Surveillance DVR storage.
With IntelliPower RPM it can vary the rotational speed from 5400rpm to 7200rpm which will lower the power consumption and maybe maximize the life of the hard drive. WD Gold HDD is designed for Servers designed to handle workloads up to 550TB per year which is among the highest workload capability of 3.5-inch hard drives. The WD Gold hard drives have a very high reliability, with a MTBF of 2.5 million hours, that is two times more than WD Black or WD Red Pro HDDs.  The performance is very similar to WD Black and WD Red Pro, so is it worth to pay the extra price for a WD Gold HDD ? It depends for what you need it, but unless you need it for a server with very high workloads then you will be better with a WD Red Pro or Black HDD which have a better price and similar performance.

Currently WD Gold hard drives are available in capacities ranging from 4TB to 8TB, higher capacities may be released soon.

GENERAL NOTE: If you want performance make sure that you always choose a 7200rpm or higher hard drive instead of a 5200-5400rpm one. Also note that the longer is the warranty offered by the manufacturer the more reliable the hard drive is. But that does not mean that it cannot fail at any time.

Previous: How to Use Windows 10 Task View
Next: OS Platform Usage Statistics November 2015